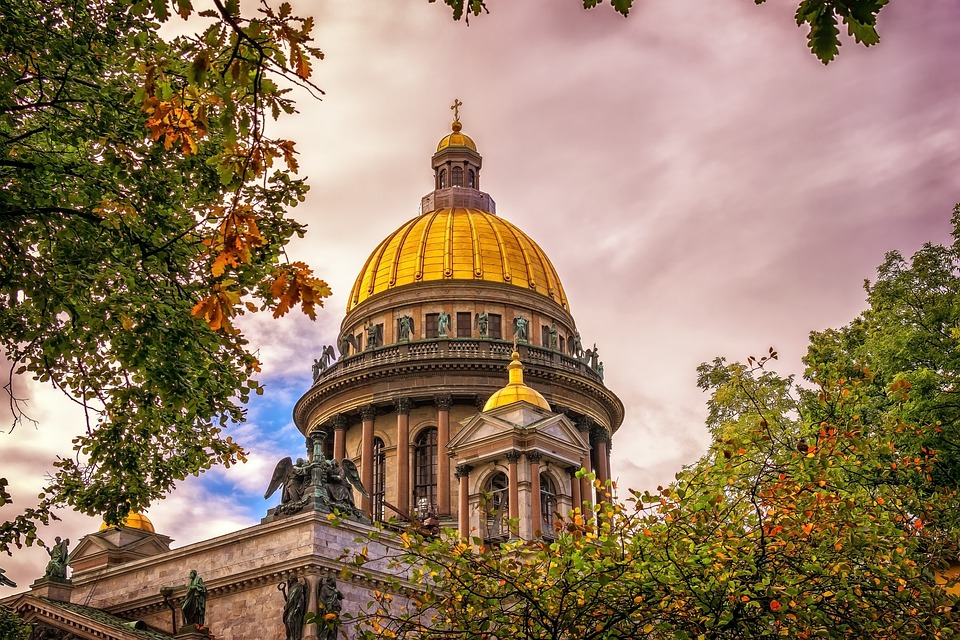 Straddling Europe and Asia, Russia is the world's largest nation and a transcontinental country with about a dozen of time zones. The unique landscapes are mesmerizing to say the least. There is frozen tundra with evergreen coniferous forests, modern cities, and ancient towns with breathtaking sceneries worthy of Christmas postcards, and the urban culture that contrasts strikingly with imperial monuments from the Soviet era. For most visitors, Moscow and St. Petersburg hold the main charm, and both offer completely unique experiences. However, Russia has a lot more to explore. Let's begin the wonderful adventure!

The Wonders of Russia

Here are the top cities and places in Russia that you can't miss at any cost.

Lying beside the raging waters of Baltic Sea, Saint Petersburg is a quaint port city and the second largest city of Russia. The cultural hub is dotted with historical landmarks, hundreds of bridges, glittering palaces, and elegant mansions where emperors once resides, sandy beaches, art galleries and museums and immaculate parks. Thanks to it numerous canals and waterways, it has earned the nickname 'Venice of the North'. Taking a leisurely stroll alongside the canals is a fantastic experience. At St. Petersburg, pay a visit to the State Hermitage Museum that exhibits millions of items and oozes grandeur, check the famous palaces; Grand Palace, Catherine and Yusupov Palaces boasting neoclassical architecture and magnificent aura.

Russia's capital and cosmopolitan core, Moscow is filled with brilliant artistry, historical gems, and contemporary architecture against the backdrop of a vividly colored floral scenery. When you visit the global city, first thing on your list should be Kremlin, the historical complex and the political powerhouse overlooking the Moskva River. Take a walking tour of the fortified citadel, its churches, museums, palace, and the bell tower. Right outside the Kremlin is the Red Square, a place that was once a site for celebrations and festivities. The cobblestoned pathways surround the marvelous structure. Then there is St. Basil's Cathedral and its beautiful domes that look straight out of a storybook. The experiences don't end here. Other highlights of your trip would be trips to Gorky Park, Lenin's Mausoleum, and farmer's markets.

The Golden Ring of Russia is a ring-like collection of old cities and towns boasting thriving greenery, onion domes, whitewashed buildings, and a sense of comfort that you won't find anywhere else in the country. As most of the destinations are quite similar to each other, it is better to explore around four to five cities. Suzdal, boasting meadows dotted with dandelions, is undoubtedly the gem of the ring. Plyos, although the smallest of the cities, has a quaintness about it perhaps due to its array of wooden cottages. Church of the Intercession on the Nerl and Sergiev Posad must not be missed either.

The chain of Islands sprawls in the Onega Bay of the White Sea offering vast stretches of unspoiled beaches, verdant panoramas, and architectural monuments. Let's not forget that the archipelago also houses the infamous labor and prison camps. Besides the haunting prisons, there is a stone-walled monastery, botanical gardens, and exhibitions.

Governed by Prussians once upon a time, Kaliningrad lies between Poland and Lithuania on the Baltic Coast. The city still carries German legacies in shape of regal monuments and architecture, but beautiful parks, amazing museums and other eye-catching attractions have taken the edge off.

Sitting alongside Black Sea, Sochi is Russia's paradise for beach bums. The resort city has a festive air about it. The boardwalk is thriving with merry crowds who come to witness spectacular sundown. Night scene is crazy as well. The nightclubs and bars lure party animals from all over the place. If you love seclusion, do not despair. Sochi has parks lined with magnolia trees where you can enjoy a quiet stroll away from the hubbub. Agura Valley, nearby Sochi, is another hidden gem with hiking trails and waterfalls.

Russian cuisine is an amalgamation of European, Caucasian, Central Asian, Siberian, and East Asian cuisines. There is a huge variety of meals that we can write an entire book on it. The hot and cold soups are highly popular. Okroshka, a cold soup and sometimes a salad, is a hearty mixture of vegetables, kvass, meat, and sour milk. Shchi (cabbage soup) is often the main soup in any Russian meal. Salads and porridge are also predominant. When it comes to main course, Pelmeni (similar to dumplings), Kotlety (meatballs), Beef Stroganoff, Blini (pancakes) and Kulich (bread) are the must haves.

When you go to Russia, do watch a ballet performance. They are awe-inspiring and dripping with sheer talent! Operas and orchestras are a must too. As sun goes down, head over to the pub or a cafe for a drink. From alcoholic to non-alcoholic beverages, drinking is a part of Russian culture. If you are in a mood, go clubbing in Moscow or St. Petersburg for a time of your life.

In Russia, you will find a plethora of upscale hotels and resorts that scream luxury in every city. To find good deals, you can check online sites. Another great option is to rent an apartment if you plan to stay for more than a couple of weeks. Rent depends on location and size of the apartment. Mini-hotels and hostels are widely available, and they mostly cater to youth and students.

High season is between June and September, and the weather is quite hot throughout the country. Prices of air tickets and hotels are high, and it is better to book in advance. May and October see fewer crowds, and spring and fall make an appearance respectively. From November to April, Russia is covered in snow and the air is festive during the New Years’ time.

Moscow and St. Petersburg have direct flights from most European countries, while Moscow offer flights from USA, South Asia, and Africa among a few other countries as well. Some other cities such as Irkutsk, Kaliningrad, Kazan, Mineralnye Vody, Murmansk and Nalchik also offer international flights. You can also travel to Russia by train if you are coming from a European country.

Domestic flights are commonly used to travel within the country. However, a more scenic route would be traveling on river. Cruises and ferry services are offered throughout the country. Trains and sleeper cars are also popular means of getting around.

Russia's official currency is Russian ruble. You will find ATMs (locally known as bankomats) in almost every city and town.  Credit cards are widely accepted. Some attractions like most museums only accept cash so be sure to check before you go.